In Washington State districts 3 and 4, two America First candidates—Joe Kent and Loren Culp—also saw tens of millions of dollars spent to defeat them in their primary races against two incumbent RINOs, Reps. Jaime Herrera Beutler and Dan Newhouse, respectively. Both of the incumbents had voted to impeach Trump in January of 2021. Reps. Herrera Beutler and Newhouse saw millions of dollars spent on their behalf by outside groups including establishment Republicans. Last minute money described spoiler candidates as ‘America First’ to split the conservative vote and defeat Kent and Culp. It worked against Loren Culp in WA-4; Congressman Dan Newhouse advanced to the general election. But in WA-3, Joe Kent’s race was much closer. Joe Kent, a former Green Beret and a Gold Star husband (his wife, Shannon, a linguist, was killed in Syria) had been leading in the polls until he was targeted by the lopsided outside money. 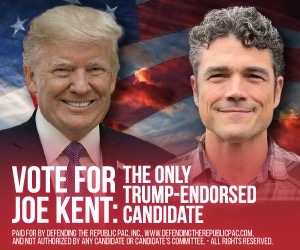 Washington state conducts elections with mail-in voting. The early ballot counts showed Kent losing to Beutler, but as more counties tabulated the ballots dropped off on election day, Joe Kent crept ahead. A week after the election, Jaime Herrera Beutler finally conceded in the race with Joe Kent finishing less than a percentage point ahead of Beutler. 16% of the America First votes went to the spoiler candidate, Heidi St. John. Now we need to elect Joe Kent in the general election; he will be a great addition to the growing MAGA conservatives in Congress.

Noteworthy: With Herrera Beutler’s recent concession, three GOP impeachment voters have now lost their primaries this year: Herrera Beutler, WA; Meijer, MI; and Rice, SC. Two Members of Congress—Dan Newhouse, WA and David Valadao, CA—advanced through their primaries to their respective general elections. And four members — Anthony Gonzalez, OH; John Katko, NY; Adam Kinzinger, Il; and Fred Upton, MI—announced their retirements rather than run for reelection. All eyes are on Wyoming next week when Rep. Liz Cheney (R-Wyo.) will be the final GOP House impeachment supporter to face the primary voters in a bid to be reelected.

Noteworthy: Washington state votes by mail. One full week after the Washington State primary, votes were still trickling in for Joe Kent’s close election contest against Jaime Herrera Beutler. As in Arizona, the early votes favored Kent’s opponent Herrera Beutler.  Similarly in Washington state, Joe Kent started out the night with the early counting showing him far behind Jaime Herrrera Beutler. But as the days passed (Why does it take so long to count the votes?) Joe Kent gained on Beutler. Then, the vote count stopped over the weekend! One cannot help but wonder about the chain of custody with our ballots. It’s important to note that Washington State conducts “open, jungle primaries,” which means that all candidates’ names appear on one ballot, making it very easy, for example, for a Democrat to cross over to vote for a more liberal Republican in one primary race, but on the same ballot vote for his preferred Democratic candidates in another race. Normally, a voter must choose a single party’s ballot in a primary election and cannot cross over and vote for candidates in different parties in different races. That only occurs on the general ballot.