Primary season is rapidly drawing to a close and August has been jam-packed with consequential primaries, and there are more still to come. Here’s Part One of a recap of the recent August primaries plus a look ahead.

The most watched state primary on August 2nd was Arizona’s primary, not only because the Republicans were choosing a senate candidate to challenge Sen. Mark Kelly for Arizona’s tossup U.S. Senate seat, but also because after the 2020 presidential election fraud fiasco, the Arizona Republican Party split into two camps. In many races up and down the ballot, moderate Republicans endorsed by Gov. Doug Ducey or former VP Mike Pence were vying with the America First/Donald Trump endorsed candidates for dominance. America First candidates scored a virtual clean sweep in the U.S. Senate primary and Congressional races, as well as in many races for state offices. Blake Masters easily won the Senate primary. DTR endorsed Paul Gosar, who has been a staunch MAGA ally, won his congressional primary. 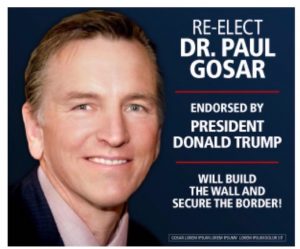 An interesting side note to the Arizona election… Voters are often advised not to vote early or use mail-in voting, but instead to vote in-person on Election Day in the conviction that there is more transparency and less opportunity for fraud to occur with same day voting. Arizona’s primary election allowed for either early mail-in voting or voting in-person on Election Day. During election evening coverage of the Arizona gubernatorial race, reporters asked Kari Lake multiple times if she would concede since the early returns showed Lake losing by a wide margin. Lake, with her characteristic bravado, confidently asserted that she would ultimately win the election when the day-of ballots were counted. She pointed out the first reported results were the early mail-in votes.  Lake said most of her supporters waited to vote on Election Day and they would overtake the early results. Lake’s assertion turned out to be correct – she won the ‘day-of’ voting by a wide margin. Kari Lake deserves credit for not trusting the first results and being too savvy to fall for the ‘Why won’t you graciously concede?’ ploy used by some in the media to pressure Lake to give up prematurely. Don’t vote early.  Vote on Election Day.